Up to Leicester last night for our gig supporting Half Man Half Biscuit at The Charlotte. Our first ever Validators gig was supporting them in Derby and over the years we have managed to get in to see them for free in this manner SEVERAL times - Tim estimated SIX last night.

Upon my arrival I met Dr Neil Brown at Leicester's Traditional Place To Meet People: The Clock Tower. Whilst there I looked in AWE once again at the crappy statue they put up to commemorate Leicester(shire) winning the rugby, football and cricket in the same year. Typically of LEICESTER nobody really noticed for six months, as they don't like to make a fuss, and eventually got a crappy little statue put up. If it had been NOTTINGHAM then they would have demolished Mansfield to build a GIGANTIC BURNING EFFIGY of Robin Hood, complete with massive speakers to shout about it.

Not, of course, that living in Leicester for 16 years made me biased in ANY way. So yes, Dr Brown and I went for a couple of BEERS, first in The Globe then in The Criterion, the latter featuring tasty PIZZA. I was thus full of The Christmas Spirit when I arrived at The Charlotte to find Tim finishing putting his drumkit, and was RELIEVED to find that Phil The Soundman is STILL Phil The Soundman, not least because he's mentioned in Leicester's Trying To Tell Me Something.

Half Man Half Biscuit had also just arrived (in a much swankier Birkenhead Van Hire VAN than usual, apparently specially chosen because they were doing two nights in a row) and we had a quick chat - they're ever so nice chaps, and don't seem to mind too much that every year or so we APPEAR at their gigs, looking excited and carrying guitars. It became clear that Carl The Drummer wasn't going to be there until much later, so couldn't do soundcheck, and it was at this point that I began to behave like a Pushy Mother. "Go on Tim!" I said, "Ask if you can play, go on, join in, you know all the songs - here, there's something on your face, let me spit on a tissue."

Ken the guitarist walked by just then and said "Do you want to come up and do the soundcheck for us, just do a jam?" and Tim VERY CALMLY said "Yeah, all right", and off he went. There was a BRIEF moment of FEAR when Nigel was nowhere to be found and Tim looked over to see if it was going to become Half Vlads Half Biscuit but Nigel soon appeared and THIS happened: 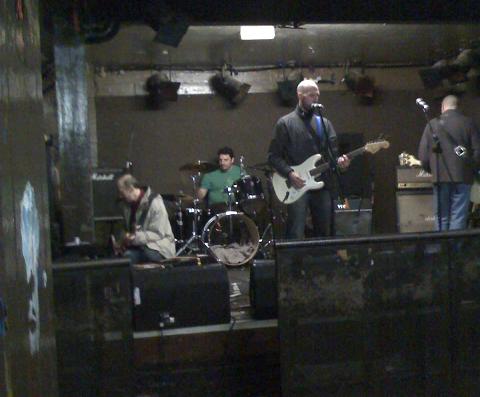 It was like an extra special Christmas Edition of Jim'll Fix It, as one young man's dreams came true. They did a run through of "Blue Badge Abuser" which, obviously, Tim knew VERY well, and throughout various Biscuits looked over and gave APPROVING NODS and swapped IMPRESSED GLANCES. Tim later admitted he'd been SWEATING with FEAR, but he looked relaxed and ASSURED - i was SO proud - and then eased into "Outbreak of Vitus Gerulaitis" to finish. It was GRATE - goodness knows _I_ was really excited, i am guessing he was quite pleased about it too though, as he said afterwards, it was a good job it wasn't The Fall as he would be in tour with them in AMERICA by this morning.

Rob and Tom had arrived so we did our soundcheck quickly and then popped back to The Criterion for a quick beer and BAND MEET, during which Tim let out his excitement in the form of some SQUEALING. As we went in we met a couple of people we used to know in Leicester who later did what ALL people we used to know in Leiceste did i.e. having been told what time we'd be on they a) turned up just after we'd finished and b) proudly told us about it.

Back to The Charlotte just before Emma arrived, setlists were written, and soon it was time to go on and do THIS:

It was GRATE! Most of the other times we've played with HMHB we've been greeted by steely glares and disdain, but this time we appeared to go down pretty well. People cheered, joined in the "Oi Hibbett!", had some BANTER, and one man got VERY excited about Tom's violin playing. "He's got it all!" he said, as he staggered by.

The fabness of the gig was very much helped by the fact that The Charlotte has, somewhere along the line, got AMAZINGLY better sound i.e. now it is GOOD whereas for DECADES it was appalling. I can only guess they've got new gear in, but it sounded brilliant from where we were standing, and seemed to be good out the front too.

Next followed some wandering around chatting to the PALS who'd come along, and also to a chap from the band The Fallen Leaves. They'd originally been playing too, and I'd assumed that they'd had to pull out for some reason, but actually it turned out they'd been DROPPED so there'd be time for a long Biscuits set. I felt really bad about it, as they'd been on the bill first, but he didn't seem to mind - he thought we were a better fit and, most importantly, he'd only asked to play so HE could get in for free, and to make up for being dropped Andy'd given him a free ticket! RESULT!

Talking of Andy Who Runs The Charlotte, I had a quick word with him where, for some reason, I told him the story of the time he refused to play us for supporting HMHB because there weren't enough people in the room. "But it was packed!" i said. "No, it's just that everyone was FAT" he replied. WHY i told him that I don't know... he DID say, however, that we were much better than he remembered us being. Ten minutes later Geoff from Probe Plus/Biscuits manager said EXACTLY the same thing! Could this be our new Top Press Release quote? "MJ Hibbett & The Validators: not as bad as you remember."

There then followed the usual GRATE 90 minutes of Hot HMHB ACTION - it was all excellent, tho I do begin to PINE for the large weird venues I've seen them in as The Charlotte, like The Forum the other week, is not really a pleasant place to be in when it's RAMMED, especially when there's clumps of grumpy old blokes who don't want to move to let people go to the toilet. It was VERY MUCH the traditional HMHB audience, like a crowd of Travelling Football Supporters rather than the much more MIXED bunch that was in London the other week.

It was a fantastic night all round, definitely the best one we've had supporting them, and also one of the best PAID gigs we've ever had - we didn't get any money for doing the gig, but if we'd paid to get in it would have been about eighty quid!

Yay Mark! Great gig last night!! Validators and HMHB in one place and walking distance from home too!!
posted 15/11/2008 by Vince