One of my ABSOLUTE FAVOURITE things about the THEATRICAL run of Dinosaur Planet was when kids would come up to me after the show and ask INCISIVE questions about the backstory. It was lovely to think they had - to use current parlance - ENGAGED with the story, and since then I've been DELIGHTED with reports that the album has been inspiring THORT, DIALOGUE and indeed further creation by more children and, indeed, some adults.

So imagine my GLEE when I found out that, in the past week, we have inspired not one but TWO seperate avenues of Dinosaur Planet-based creation!

The first of these that I saw was a WRITING PROMPT over on io9. Apparently they run these regularly, where they provide some concept art and invite readers to write (very) short stories based on them, and this week's prompt is SPACE DINOSAURS! It's a beautiful idea and I feel honoured to have been part of the inspiration for it. There's some GRATE stuff in there too!

Then very soon after that I got an email from Ms J Lockyer containing the results of the Funsense Storytime sessions at the Green Dragon in Croydon this weekend just gone. Jenny (aka "WPC Jenny" on the album) does these regularly, although this was the first one using music and images from Dinosaur Planet. Jenny says: "The first session was Prehistoric Earth directly before the dinosaurs were kidnapped by Giant Space Robots. In this session children could dip their hands in a swamp, set up base camp, avoid Velociraptors and hunt for dinosaur facts and make a volcano ERUPT AARRRRGGGHHH". Here's a picture of the volcano: 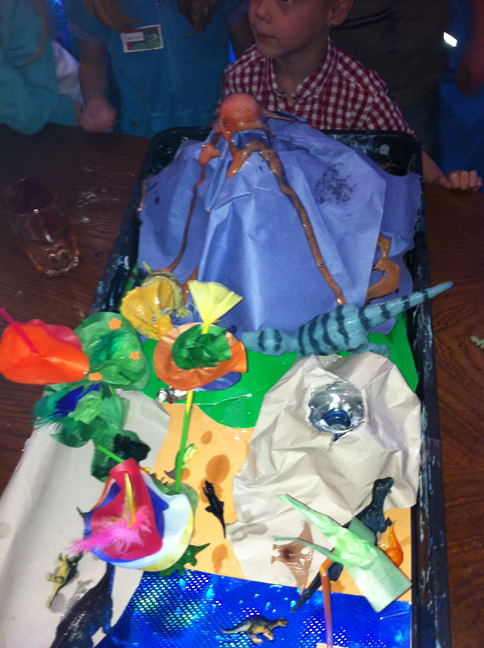 There was then a session for older children where "they got busy designing Dinosaur space ships for the dinosaurs to escape the robots and then we all flew in a space ship one of them had designed. Vedant drew some comics called Captain Vedant and designed a Space Robot capturing device." Here's the comics: 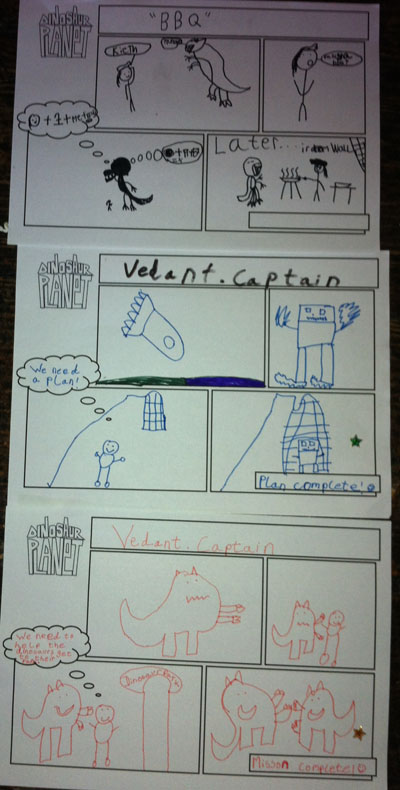 I very much like the fact that Captain Keith appears in these! Jenny does these sessions (not all Dinosaur-related!) every Saturday, if you'd like to know more email greendragonstorytime@gmail.com to join the mailing list - tell her I sent you!

I must say I'm really REALLY happy to know that this sort of thing is going on, and I'm planning to have a go later in the year at encouraging SIMILAR activities elsewhere. If anyone out there works in education or RELATED and fancies trialling some Dinosaur Planet ACTIVITY PACKS, do let me know!