Blog: We Never Won An Award

The awards for the Buxton Fringe festival were announced on Monday and BLOW ME if we weren't nominated in TWO sections - Comedy Show and New Writing!

We didn't WIN, but still, being nominated is VERY exciting INDEED. I don't think we've ever had ANY of this kind of recognition before - Steve says it's definitely a THING which we can show off about, so I've done a sort of press release/email to Reviewers saying "Look! They thought it was good, so YOU should come and review it too!" Here's the full text:

We're very proud to report that "Total Hero Team", our show for this year's Edinburgh and Camden Fringes, has been nominated for two Buxton Fringe Awards.

We were nominated in both the "Comedy Show" and "New Writing" categories, and were described as "the happiest show on the fringe" and "the type of 3-D experience Hollywood can only dream of".

I fully expect that this will result in us winning The Perrier Or Whatever It's Called Now Award, becoming regulars on "Mock The Week", taking over Michael McIntyre's Roadshow and by this time next year being MILLIONAIRES. What could be more straightforward?

Obviously a large part of my BRANE is REALLY thinking along those lines, even at MY great age and experience of that sort of thing not happening, but I'm generally TRYING to concentrate on our achievable goals i.e. 1) having loads of lie-ins b) drinking lovely beer c) eating curry d) seeing lots of pals. This time next week I'll ALSO be PANICKING about what to pack - I CANNOT WAIT!!

UPDATE: We got certificates!! 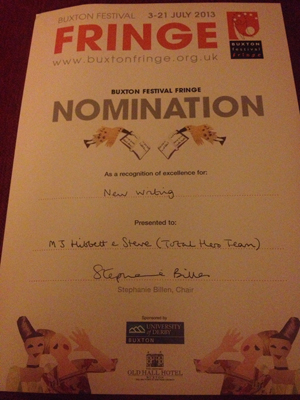