Blog: Get On With It

I had one of my Days Of Meetings on Monday, when I ZOOM around That London meeting people. It's GRATE because a) dashing around having MEETINGS feels dead swanky and b) it means I get to spend the rest of the week sitting around at home catching up on telly NO WAIT I MEAN doing lots of writing.

In between these various meetings I found myself with an hour to spare. I'd already had about 16,000,000 cups of coffee so rather than go and sit in ANOTHER cafe I decided to go and get myself some of that free culture that London town is so full of. I wandered over to the National Portrait Gallery to see what was on, and was very happy to discover a big exhibition about The Tudors. My delight was entirely because of my intense and serious political interest in this era and definitely not because I'm watching "Wolf Hall" and keep getting confused about who went where and killed whom in which order.

It was all very impressive, with lots of GRATE Small Items like Henry VIII's rosary beads and an essay/autobiography by Edward VI. I love this sort of thing - actual real STUFF that has been used by legendary figures from hundreds and hundreds of years ago. It's kind of like when you find a TOY you loved as a child which you thought had been lost years ago, the actuality (HEM HEM PROSE) of a THING is suddenly surprising and exciting. I liked it!

After that I went for a bit of a wander through various galleries full of Posh Twits Through The Ages until I reached a room of POETS and WRITERS, mostly The Romantics. All gathered together like that it looked like a Gathering Of The Prats, all gazing out pompously with luxurious hair, except for one tiny little picture in a corner of Jane Austen. This picture,in fact: 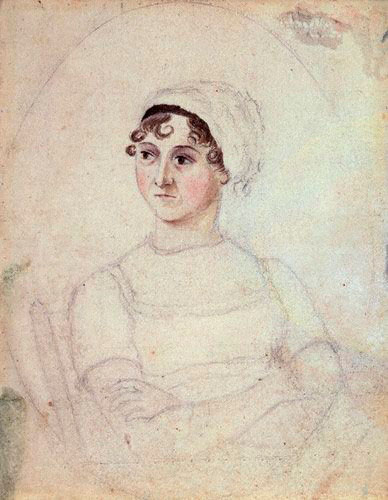 This is the famous ONLY picture of Jane Austen actually drawn while she was alive, done by her sister Cassandra. All the other pictures of her are EITHER done from memory/entirely made up OR are sanitised versions of this one. I'd seen reproductions of this picture before, but usually CROPPED or cleaned up. Seeing it close up I realised that it wasn't just a face and vague outline, you could see the full position she's sat in, arms crossed, looking grumpy, clearly thinking "FFS get ON with it I have a BOOK to finish." I love it, and seeing her sat in a room full of POETS made it even more enjoyable, like she was sayinng "CHRIST! Stop PONCING AROUND and get ON with it you bunch of useless pillocks."

In fact I liked it so much that I bought a postcard - nothing says dedication to your literary heroes like spending 70p - and it's sat on the table next to me, looking disapproving, saying "You've got things to do Hibbett, stop titting about!" I'd best got on with it!