Blog: Into The Woods

I was back on Hampstead Heath with Mr J Dredge this bank holiday Monday, commencing filming on our EXCITING new WEB SERIES!

This one will be using all the facets of modern televisual film making, as not only will it feature 5 (five) episodes with each one taking place in TWO (2) locations but it will also feature my first use of panning AND close up microphones! How's THAT for pushing the boundaries? It's like two years of film school all wrapped up in one afternoon!

Our job this time was to do the outside sections, which meant quite a while filming in the WOODS of Hampstead. Here's a thrilling behind the scenes shot which I feel captures some of the excitement on set: 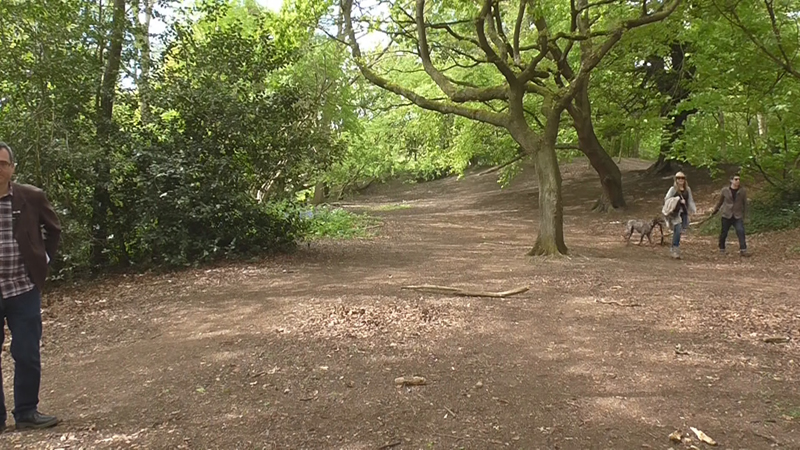 PHEW! Hope you were sitting down for that one!!

Once all that was done we headed out onto the dangerous streets of downtown Hampstead itself to do one final shot. This took ages as ruddy people kept PARKING where we were trying to film or driving past or talking or just GETTING IN THE WAY. Honestly, what were they thinking of? Didn't they have better things to do on a sunny bank holiday weekend than go to the park?!?

Eventually we gave up on our first choice of location and went round the corner to a quieter spot where we managed to film our last shot without getting run over, though it was fairly close at times.

Job done I headed home and had a check at what we'd done. The film looked GRATE and the sound seemed to have worked as well, which was a HUGE relief! Next job will be to get the inside scenes shot, then we start on the epic journey of EDITS. It's a long way to go - we're looking at JULY before it's released - but this was at least a good start!