I was back in leafy Farringdon yesterday, meeting Mr John Dredge for some FILMING. It's AGES since we last put out a video - we did start filming a whole webseries a few weeks ago (as mentioned here) but doing filming outside with MOVEMENT and SOUND proved a bit beyond my cameraman capabilities, so we put that to one side and decided to have a go at something a bit simpler.

In the end we did THREE things - a short monologue by John and two sketches starring us both as CHARACTERS. I always find this sort of thing difficult as it involves ACTING which I've never quite got the hang of. At various points I thought "I seem to have annoyed John somehow" then realised that it was ACTING! I then had to stop myself from saying "Good acting there!" as that would probably have been ACTUALLY annoying. I tell you what, it is the hardest job in the world. Look at us here, WORKING. 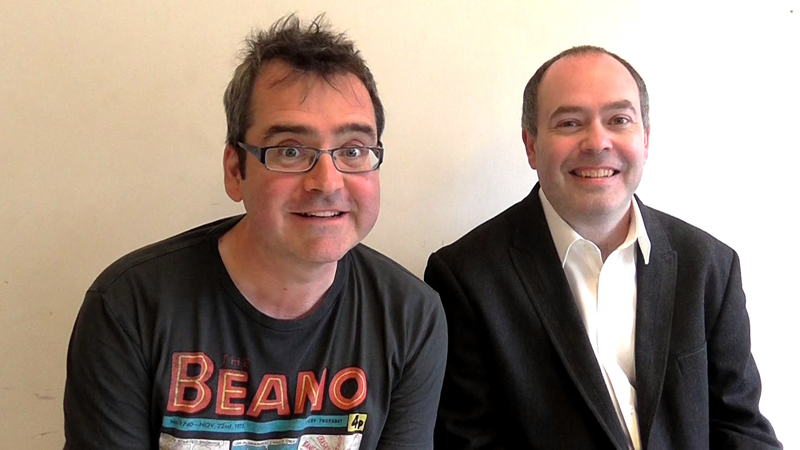 There was quite a LOT of chuckling, also GUFFAWS and even a few ROFLs, which is always a good sign, and we packed up happy with our work. On the way out John suddenly said "Nick Wilton!" and turned to speak to a very nice chap who turned out to be the aforesaid Nick Wilton. The name rang lots of bells and he did look very familiar, but it wasn't until I looked him up when I got home that I let out an almighty "Oh HIM!!" Go on, look for yourself!.

It turned out that John had written some material for a sketch show he'd been in years ago, and then also turned out that Mr Wilton followed John on twitter. It was all rather exciting and as we left I pointed out that this was surely an OMEN - an omen of GOOD TIMES to come!