Saturday afternoon saw me heading off for THE CHILTERNS, where I was due to play at The Towersey Festival. I was VERY MUCH looking forward to it, partly because I like gigs, partly because I LOVE playing festivals, but mostly because I was going to be doing a BIG SHOW with Mr G Osborn and Ms Grace Petrie!

I had to get there first though, and this took a bit of doing. The festival website had said that there were two stations equidistant from Towersey - Princes Risborough and Haddenham & Thame Parkway. I decided to go to Princes Risborough as, I reasoned, it's a TOWN and so more likely to have a taxi rank. When i got there, however, I found a taxi rank, a taxi portakabin, a very helpful taxi company bloke, but no taxis! "You should have gone to Haddenham & Thame" he said, "It's much closer and they have a rank!"

I duly bought a ticket, had a quick look at the local area (no normal shops but lots of ODD ones including a Soft Water Shop and a Garden Railway Specialist), took a five minute train journey, and found NO rank or taxis at Haddenham & Thame BUT a portakabin. The chap within locked up his office and drove me to The Travelodge - phew!

I was a bit ALARMED when the check-in lady said "We lock the doors at 10pm" but then when she saw my face said "Don't worry, there's no curfew - just ring the bell." I got unpacked and headed out to the festival site, but got about 3 feet before it LOBBED it down with rain, so DIVED into the adjacent Little Chef for some CHIPS. It was thus a FAT SATURATED Hibbett who waddled along the road to the festival site once the rain had stoped. It only took 15 minutes to get there, but then took another half hour of walking around the perimeter to find the Artists Entrance - I guess I might have been the only ARTIST walking there, so it wasn't really designed for pedestrian access!

Once in I dropped my gear off at the stage, put on a clean shirt (all the walking and CHIPS had got me a bit sweaty) then went to look for Gav and Grace. "Where can they be?" I thought. "Ah yes, here they are at THE BAR."

It was lovely to see them, also Mr J Hare who was there on Keyboard duties with Gav. What followed was a LOVELY afternoon and early evening during which there was BEER, chat, Shop Talk and GOSSIP. It was BRILLIANT to see them all and also to be able to wander round such a GRATE festival. Apparently it's been going 52 years so has had plenty of time to get things RIGHT - there were AMPLE bars, LOADS of food shops (including a TONNE of veggie places) and even plenty of places to sit down. Even the weather was perfect, though I suppose they couldn't really claim credit for that. It was an ACE place to be, full of happy people having a nice time, often across several generations.

After having such a lovely time it almost seemed like a shame to do our show. We were in The Big Club, one of those MASSIVE two-peaked big top style tents full of SEATS, the number of which I tried not to think about as I was quite SCARED enough already. We'd talked vaguely of what we were going to do at various points during the day, and had agreed that instead of our usual One Set After The Other arrangement this time we'd try ALL sitting on stage at the same time and doing one song at a time each. If I was just WATCHING I'd've thought "That sounds fine" but the idea of DOING it - and having to KEEP playing in between two people as BRILL as Gav and Grace - filled me with terror. Our slot was for 90 minutes, what if I needed the LOO?!?

We did a soundcheck, I went for a Nervous Wee, and then we trooped on again for SHOWTIME. We'd arranged three chairs on the stage with John off to the side with his keyboard, which meant that we were all there throughout watching each other and, actually, this made it EVEN MORE fun. Whenever I play with Gav and Grace I sit and LARF at their CHAT and enjoy their songs anyway, so it was absolutely no hassle to do this on stage - whenever I see a "songwriters circle" arrangement I always wonder how the people NOT singing manage to hold their Serious Songwriter Faces for the whole time, but I think we all ended up just GRINNING throughout.

There was a really big audience, who seemed to enjoy themselves too. Here they are, as seen from my seat, while Grace was ROCKING the tent: 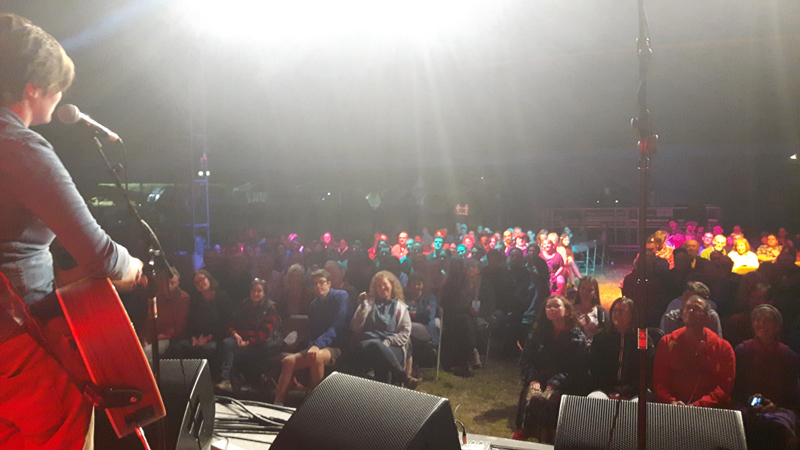 I must admit my MAIN fear was of being a LULL between these TITANS, but my stuff seemed to hold up all right. I even managed to nip off for a WEE at one point, and then had time to get a PINT on the way back. You don't get that at normal gigs! Here's what I did:

Originally we'd planned to do SEVEN songs each, but the CHAT rather took over, hence six. We'd also agreed to go Gav, Me, Grace throughout with Grace's last song as the FINALE, so I was a bit surprised when I sat down after It Only Works Because You're here to see the others putting down their AXES and getting ready to head off. They had - SENSIBLY - agreed to make that the last one and NIP OFF, which meant we got to STRIDE back on and do Grace's "Inspector Morse" as the BIG FINISH, which was AMAZING apart from the fact that "someone" (hem hem) did most of the choruses wrong. Sorry!

We stormed off in TRIUMPH, before hurrying back out again to see if anyone wanted to buy some CDs. Some people did, including some old CHUMS I'd not seen for YEARS! I managed to deal with my customers at high speed, so ended up trying to channel other people towards payment - as ever when the ARTISTE does the MERCH you get some people who want to have a CHAT, and I always worry that other, more shy, people towards the back of the queue end up giving up. I think I managed to SERVICE everyone though!

When all was done and dusted we packed up and prepared to go our separate ways, though not before Gav asked a kindly security guard to take a picture of us, THUS: 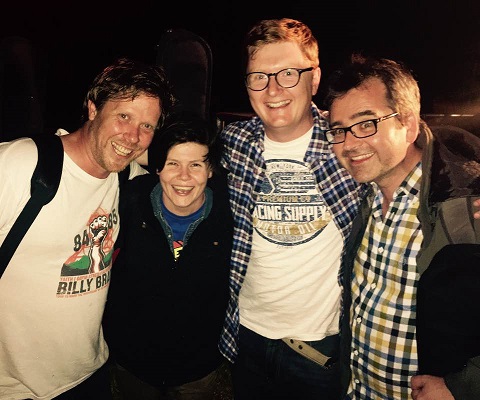 Those are some happy faces! We said our farewells, agreeing that we should DEFINITELY do some more gigs together this way, and set off into the night. I had a long walk down a dark lane (I'd brought my torch!) and got back to find the Travelodge LOCKED... though not very firmly, as the door opened with a slight nudge. I congratulated myself on getting back without bothering anybody and decided to have a shower... wherein I pulled the EMERGENCY ALARM by mistake (I was in a disabled room) and ended up with a lady having to come into my room to switch it off while I tried to look business-like while DRUNK beneath a small towel at 2am.

It was the perfect ROCK way to end what had been a fantastic day - can I come back and do it again next year please?