Once we'd found each other we set to work on the job at hand, which was to film a video for 'The Day We Fall In Love', our track on the Listen To The Bands compilation of Monkees cover versions. John does an Alec Guiness impersonation on the track (NB it is widely held, not least by ME, to be the WORST EVER Monkees song, so our version is not entirely respectful) and so our plan was to do it SORT OF like Smiley's people. As you can see, John was costumed appropriately. 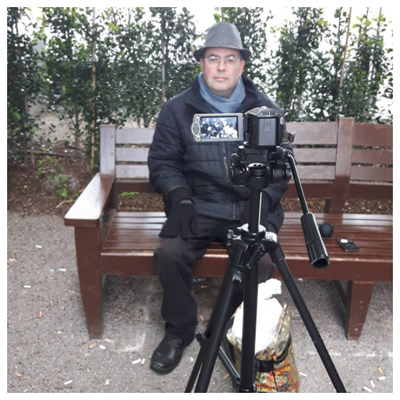 I'd suggested filming it at Canary Wharf because I thought it would look suitably BLEAK on a Sunday, so was surprised to find quite a few people wandering around (often, RUDELY, in the distance behind us while filming - have they no respect for ART?!?), but we managed to get all our shots done pretty easily. John had LEARNED all the words, which made the first bit of lip synching dead easy, and then we wandered around looking for BLEAK spots to film him walking about in. We filmed about 30 times more than we needed, so when I later sat down to edit it I had to leave LOADS of Dramatic Walking shots on the metaphorical cutting room floor.

The finished version looked pretty darn GRATE and, with the inherently DAFT version of the song we did, is also pretty darn FUNNY, at least according to me. All being well it will be online SOON - fear not, I shall ALERT you when it is!