Oh what a glorious day it was on Saturday, for LO! it was the Totally Acoustic ALL-DAYER!

In the days leading up to the event I had been viewing it with some considerable trepidation. Would anyone come? Would too many come? Would my recorder cope with seven acts? Would my body cope with the BEER?!? However, when I get up on Saturday morning i realised that I was going to be spending the day in my favourite pub, surrounded by PALS, and found myself DEAD EXCITED!

My DELIGHT was increased when I rolled up at the pub and saw that they had prepared us a SPECIAL BEER for the day, THUS: 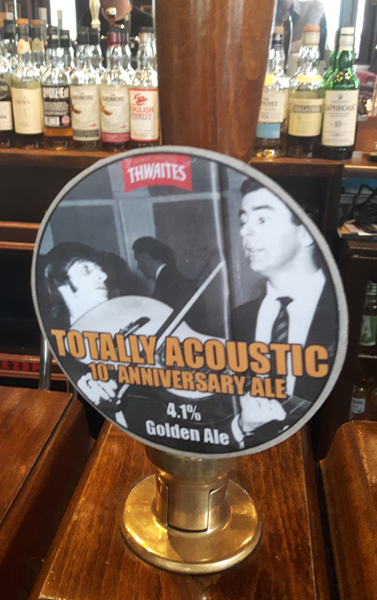 CJ at the pub had said he'd get in whatever BEERS we liked for the day, and we'd provided a LIST, but this was entirely unexpected. The King & Queen is GRATE!

I went upstairs to get the room set up and then enjoyed my usual WORRYING while I waited for people to arrive. The worrying was even greater than usual on this occasion, as I HAD to start on time at 2:30pm as I was DETERMINED to keep it all to time, not least because I wanted to be able to watch Mo Farah's last race at 8:20pm!

My worries were all for nought, as a steady stream of people arrived and the room was JUST RIGHT at start time when the first act (ME) came on and did THIS:


I had a LOVELY time - it's a GRATE room to do a gig in, the audience were LOVELY, and I had a BAR to lean against whilst doing CHAT. I just about managed to keep to time too, which was good!

The rest of the day rolled by at EXTREME SPEED. As I say, I'd been worrying about how I'd last through a whole DAY of ROCK, but it ZOOMED past. Eventually I realised that this was because I had picked some of my FAVOURITE people to play so of COURSE it was all going to go quickly! This did put me at something of a disadvantage for introducing the ACTS, however, as I found myself saying pretty much the SAME THING every time i.e. that they were each one of my FAVOURITES and were ACE. I find myself in a similar situation writing this here blog too - Mr Matt Tiller came on after me and was HILARIOUS, all-round LEGEND Mr Peter Buckley Hill was BRILL (doing his first gig without a gall bladder too!) and the Ms Jenny Lockyer closed the first half with a TOUR DE FORCE of HITS.

See what I mean? Anyway, Mr Pete Green had suggested that we have a BREAK halfway through, as he's had some success with that at his OWN all-dayers, so at this point myself and The Acts On My Bill took full advantage of this by popping round the corner for some late lunch in Leon. I can confirm that having a break is a BRILLIANT idea, and enabled us to head back for MORE fun, with everyone enjoying a bit of SECOND WIND.

The second half was much the same as the first in terms of everyone being ACE. We began with the PATRON SAINT of Totally Acoustic, the aforesaid Pete Green, whose ELEVENTH appearance was if anything even MORE ace than the preceding ten, then the always MARVELLOUS Mr Gavin Osborn ROCKED the house, as he always does. We CLIMAXED with Mr Keith Top Of The Pops, accompanied by His Minor UK Indie Celebrity All-Star Backing Band, BATTLING through what turned out to be a KIDNEY infection to bring THE ROCK.

It was FANTASTIC, and when it was all over I felt a bit SAD there there wasn't more. Still, we had achieved my Organisational Objective of running PRECISELY to time throughout, which meant those of us who wished to could go downstairs and SHOUT at the TELLY for a bit while MO got his silver. With that done all that remained was to sit around for another pint and some further CHAT before heading home, where I arrived JUST in time to see the men's relay team win GOLD!

It was a LOVELY day and I'm EXTREMELY grateful to everyone who came, everyone who played, and everyone at the PUB too. We're on HIATUS for a while now - there'll be at least FOUR more podcasts though, one for each half of this show and then two ROUND-UPs of extra tracks from this series. After that I'm not sure when we'll be back, but with GOOD TIMES like THIS available, I know we WILL!