I returned to the King & Queen last night with some TREPIDATION, partly because we had LOST one of our acts for the night (PO! had had to cancel because Ruth has tonsilitis) and partly because we are getting quite close to CHRISTMAS, which sometimes leads to SPILLAGE of Amateur Drinkers into the rarified salon-like atmosphere of the upstairs.

Worries around the first item were allayed somewhat by the news that The King & Queen have now got their 2020 diary, so I can BOOK dates for future shows and then get PO! rescheduled. Worries around the second were ENHANCED by a) two extremely drunk women blocking the doorway INTO the pub b) another very drunk woman staggering in and singing at us then c) the original two drunk women coming back and almost falling over, looking for coatsm all before we'd even started. It was all FINE after that though - as ever, the office drinkers start to disperse around 7pm, leaving the bar a bit freer for the ROCK shift!

When I eventually managed to get through the downstairs THRONG and into the upstairs room I discovered that CJ, bar manager and all-round good guy, had set the room up for us already. I was then joined by Mr J Dredge, and we had a quick run through of the Plinths songs that we were going to do. This was all going well until we were interrupted by the very drunk person mentioned above. "I sing for a living!" she said. "What sort of thing?" I asked, and she started singing. "No, I meant in what way do you sing for a living?" "Play something I know and I'll probably know it," she said. "No, I meant, do you sing sessions or something?" She nodded wisely and then sang "Oooh, whooa-oh-oh." I VERY POLITELY thanked her and said we needed to get on with the practice, and she wobbled out again. It was most odd!

Shortly after that Robin Robberie arrived, then a whole heap of other delightful people, including Val and Nik also of Robberie, until we had quite a full room. I'd been a bit worried that the lack of PO! would harm attendance, so was very pleased to see the room at OPTIMUM audience levels. Steve could not attend, which was doubly sad because he couldn't do the "OOH" in the theme song and also because Susan had brought him some Red Leicester Mini-Cheddars as a present. Not only this, but she'd brought enough for everyone AND some Pringles AND some kitchen towel for use as napkins - my regulars are the BEST!

We kicked off with a rousing renditon of the theme tune (with Mr W Pilkington filling his regular role as Super-Sub by standing in for Steve) then I did the following:

It seemed to work pretty well - I was very happy to DEBUT Bad Back and came about as close as I'm ever likely to get to doing Have A Drink With Us (Drink Doch Eine Met) almost right - and it was nice to do three whole songs, expanding my set slightly to make up for the lack of PO! Then John came on for the Plinths section, which was also expanded from one song to three, THUS:

For me this was a bit of a PANIC, as I had to PROPERLY CONCENTRATE on playing the songs right, so spent most of the set SWEATING while staring at a piece of paper, but whenever I looked up I saw a lot of smiling faces, and John sounded GRATE. These aren't songs I've played very much, so it was lovely to hear them in a room full of people, and they sounded dead good!

Then, after the break we had Robberie who were, as ever EXCELLENT. 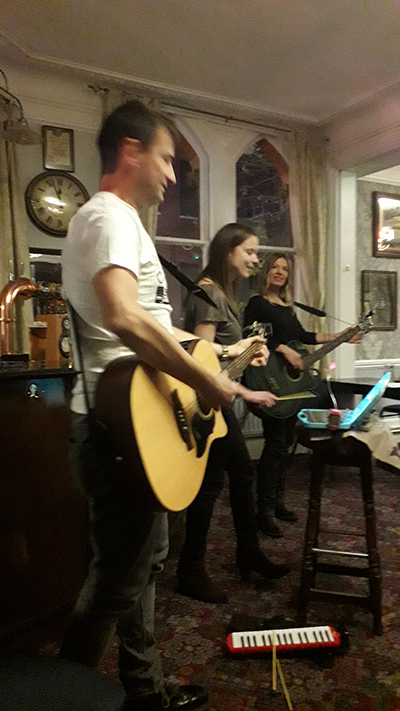 I love Robberie, they are ACE, and it was all I could do not to sing along all the way through. At one point Robin said "We're doing Mark's favourite song" and I said "Seven Hills?" which was not what they were expecting - they'd meant "This Dancefloor Needs Me" which is ALSO ace and ALSO my favourite, though I must say on this occasion I was moved even more by "Journeyman". What I'm trying to say is that all their songs are ACE!

We finished just after 9pm, which left a really good length of time to catch up with pals various, including Mr A Lawson who I'd not seen for a while, and sample some of the fine WHISKIES what they have behind the bar. It was a BRILLIANT night, and I can't wait to start booking next year's now!