Unidentified Couple
Yesterday we DROPPED (it means "released for public consumption" - get with it, Grandad) the cover for the Jane and John single "Our Year" which, as I previously mentioned, will be out on Monday 14 December. It looks like THIS: 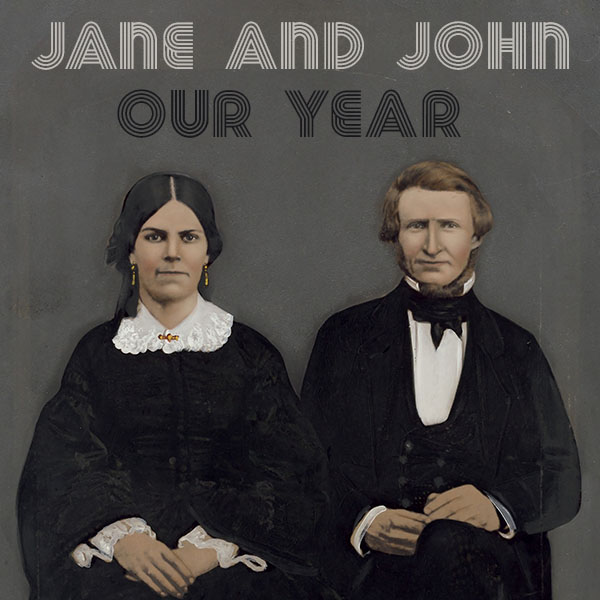 I flipping LOVE this image, which was found on Smithsonian Open Access, a rather wonderful repository of royalty free art which the museum recently DROPPED (see above). It is FULL of images from their collection that they've made available for any purpose, which is rather nice of them. I do like The Smithsonian, especially their magazine, as pretty much every day they tweet a story about something FASCINATING. It's sort of like National Geographic, but not boring.

We had a couple of goes at the artwork for the single before we settled on this image. The Canvas In My Frame had lots of ideas about how it could look, and we tried various ways to CAPTURE these THORTS without getting it quite right - it's always difficult putting ARTWORK together when a) you're not just using a photograph of yourselves and b) you can't really draw something from scratch, so I was DELIGHTED to discover that Smithsonian were running this service, and when I found the original painting that our image was taken from I was ENAMOURED straight away.

I copied the painting, cropped it, stuck it underneath the text which The Paint In My Pot had already suggested, and showed it to aforesaid who was similarly ENAMOURED. There's something about the pair of them that makes you think they look like fun. They appear to actually like each other, and I can imagine sitting opposite them at a boring WORK DO or something, and ending up nipping out to another pub with them for the rest of the night.

According to The Smithsonian's information nobody knows who painted the picture, or who the couple are. They know they're American and it's from between 1865 and 1885, but that's about it. In some ways this is a relief - without any other info to go on, I'm free to just imagine them being a lovely couple to go out for a curry with.

In fact, the only problem is that I've no way of finding out if there were ever any other pictures of them - if there were they'd be prime candidates for the next single!

For LO! at last the truth can be told - over the past few months I have been involved with a brand new band called Jane and John which consists of myself and The Words In My Lyrics. It all came about when the aforesaid suggested that I have a go at writing "a proper pop song". This seemed like a good idea to me, not least because LOCKDOWN meant I had TIME to do something like this again, and as we discussed what it could actually be ABOUT The Headline Of My Story said that our experiences of and feelings about this Most Odd year might be a topical topic. THUS we decided to co-write it and before we knew it we'd formed a band!

I spent AGES trying to work out what the band should be called, mostly using ANAGRAMS of our names, until one day my fellow band member came up with "Jane and John" as that's our middle names. It's SUCH a GRATE idea that I found I was powerless to object, and so "Jane and John" it was!

We wrote the song called "Our Year" together and then, over the next few weeks, recorded it on my laptop. It took AGES because it was something VERY different to what I have known with The Validators - for Jane and John we were trying to create a modern sounding POP SONG with loops and samples and - excitingly for me - MIDI instruments, something which I've been meaning to work out for about a DECADE. In the circumstances it was nice to have something that wasn't WORK or the PhD to DO, and the whole process was helped ENORMOUSLY by the previously un-utilised arranging and production talents of "Jane". On several occasions I was sat at the laptop with my BRANE pounding, unable to work out what to do, only for her to come by, have a listen, and say "put a triangle on it" or "there's a note missing there" or similar.

It has, to be honest, been something of a REVELATION, both in the working process and what we've come up with. We've actually written and recorded TWO songs now - "Our Year" is coming out as a single on 14 December, and we've got a Proper Christmas BANGER also coming out via another route before then which I'll tell you about nearer the time.

This is not a replacement for The Validators by the way - The Vlads are very much ONGOING and INDEED had a BAND MEETING on ZOOM last week during which we discussed ... er... well, I'm nor sure exactly what we discussed, but I do recall LARFING an awful lot!

Further Jane and John FACTS will start heading your way in the next couple of weeks, but in the meantime I would be EXTREMELY grateful if you could go and follow us on The Social Medias - we have a twitter and a facebook which will be full of FACTS as we get nearer to release day.

It's VERY exciting to FINALLY be unleashing Jane and John on the world, and I cannot WAIT for everybody to actually HEAR what we have wrought!