Totally Acoustic Episode TWO
The second episode of the Totally Acoustic has just gone online, with Goddamit Jeremiah, Alex And The Christopher Hale Band and The Spearmint Sea, and you can see it right HERE:

It also features ME doing a brand new song called Rocking Out (but quietly) all about the dilemmas faced by those of us doing this sort of thing. I wrote it for lockdown show that was being put together by someone else, but I'm not sure if they're using it now so I thought I might as well do it for mine!

The next epsiode will be out on Thursday and, having seen all of the videos, I can tell you that it's going to be a CRACKER! I must say I'm really enjoying these shows, hopefully there'll be quite a few more!

It features Uke Fatbarsteward, David Leach and Helen McCookerybook and, as it says in the video, if you liked their stuff please go to their bandcamp pages (linked to in their names above) and buy some stuff, as they are GRATE!

It's also got me in it, recorded yesterday, and OH MY but that was a nerve-wracking experience, not least because I was doing a RE-WRITTEN version of Mental Judo which I REALLY wanted to get right. I think I got through it all in one piece, although there are still a couple of cock-ups, like saying David had come from Bristol, not Cardiff, and ESPECIALLY trying to do the looking to the SIDES thing, in the expectation that it would look AMAZING if I could do Powerpoint Transitions between me and the acts. It didn't, so I took it off!

These are all lessons to learn for the next show, which is currently planned to be out next Wednesday (April 2), with Goddamit Jeremiah, The Spearmint Sea and one other. I've seen the videos so far and it is going to be ACE!

For instance, we had to cancel last week's Totally Acoustic because The Government told everyone not to go into pubs, but this gave me the idea to see if we could maybe take the whole thing ONLINE. I got in touch with the acts who were meant to have been playing last week, as well as some of our previous participants, to see if they fancied taking part in some VODCASTS, and I am delighted to say that, starting this Wednesday, we'll be doing a series of VIRTUAL Totally Acoustics. If all goes to plan each show will have three acts doing a couple of songs each, plus ME doing one as usual to kick it off. They'll be pre-recorded rather than live because it's a LOT less hassle to do it that way, technically and also in terms of getting everyone together at the same time, and it ALSO also means you'll be able to watch them whenever you want.

The first one show feature Uke Fat Bar Steward, David Leach, and Helen McCookerybook, with next week's seeing the long-awaited return of Orange Nichole alongside whoever sends me their videos in before now and then! There'll be links at the end to everybody's bandcamps/webpages too, so you can buy some music from the acts instead of the whip-round. I think this could be Quite Good, but let's see how it goes!

While planning this I've also had a look through the settings for my YouTube account and realised that there are a few recordings of old shows that I have never unleashed on the world at large, and so I thought I might inflict a couple of those on everyone, commencing with this previously unseen live recording of Moon Horse VS The Mars Men Of Jupiter, HERE:

The quality of the video isn't brilliant, but the quality of the PERFORMANCE is quite frankly ASTONISHING. It made me laugh anyway, and I'd already heard all the jokes, so I hope you enjoy it too. If we're all still at home by the end of the week I might unleash the live recording of Total Hero Team next!


Oof!
On Monday night myself and The Punchline Of My Gag went to London's fashionable Leicester Square area of London for a night at the THEATRE. For LO! AGES ago we had got tickets to see John Shuttleworth on tour, and this was the night it was happening.

The show was in the Leicester Square Theatre, which is LOVELY. The seats are comfy, you can see everything, and there's FOUR easily accessible bars so you can actually get a drink. Even better, our seats were on row B at the end, just after Row A stopped existing, so we had vast swathes of legroom for the entire show. It felt very luxurious!

The show itself was BRILLIANT. He really is very funny, but later on when I thought about the bits that made me laugh the most I realised that none of them were Actual Jokes. There's a bit where he tries to remember someone's surname which made me LARF no end at the time and then for days afterwards, also a whole section about a dust pan and handbrush which is making me grin now even thinking about it. It's all so beautifully done - for instance, he briefly gets onto the subject of Greta Thunberg and it's done in such a nice way, based on what a bloke like John Shuttleworth probably would think but demonstrating kindness to the character too. It was really good!

It was a very mixed audience, age-wise, which I guess speaks to how long the act has been going, both on Radio 4 (you could definitely spot the Radio 4 listeners!) and the live comedy circuit. It was all rather wonderful, with the only thing ever so slightly bothering me being the subject matter. A LOT of his songs are about mundane, everyday matters done for humorous purposes, and it struck me throughout that it's not a million miles away from the sort of things I write songs about. But that can't be right can it? I am a SERIOUS ARTISTE!


Double Dora
A little while ago the Artefacts In My Exhibition noted that there were two interesting shows going on at The Tate Modern in London's fashionable London area of London. The first of these was a retropsective of Dora Maar the photographer who became part of the surrealist movement and was an influence on Pablo Picasso, whilst the second was a similar one about the Hungarian artist Dóra Maurer. That's two seperate exhibitions, one on an artist called Dora Maar, the other on an entirely different artist called Dóra Maurer. We resolved to go and ...

HANG ON A MINUTE! Double Doras?!? Did nobody at Tate realise this was happening? Surely this is either a daft and confusing accident OR an excuse for HILARITY and much REMARKAGE by the gallery, but there was evidence of neither. The Tate appeared to have adopted an attitude of pretending it wasn't happening and that NOTICING it was a very silly thing which they would not take any notice of, despite the fact that when we went on Saturday we saw confused people at both exhibitions who'd gone to the wrong floor for the one they actually wanted to see! 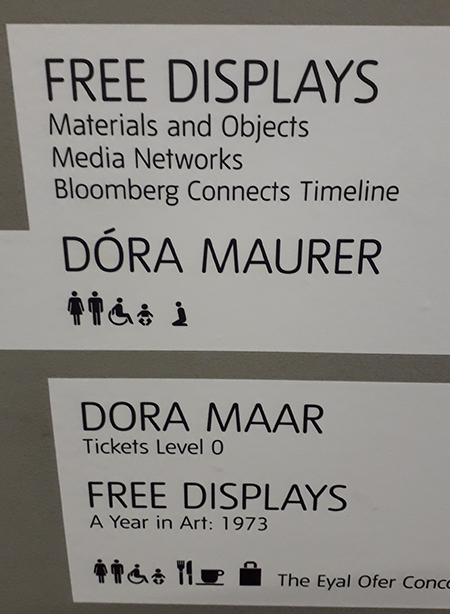 Our first Dora was Dora Maar, and it was Quite Interesting. It started off with some pictures she'd taken as a commercial photographer, which were All Right, but then got properly good as she moved towards surrealism. All was well until we got to the room about her relationship with Picasso, which featured a couple of Picasso paintings - one a portrait of Dora herself, the other Weeping Woman. These were FLIPPING AMAZING and, sadly, put everything that had gone before into the shade. We both felt a bit guilty about this, going through an exhibition about a woman and getting impressed by a couple of pieces by some bloke she used to know, but they WERE dead good. Worse yet, during their relationship Picasso had advised her to concentrate on painting which, going by the contents of the last few rooms, was... maybe not the best advice.

As ever with these exhibitions it was VERY interesting quite apart from the actual ART what we saw, as we learnt about the people she knew, the work she did, and the techniques what she used. There was more of this in the second Dora exhibition, although I felt there was a bit TOO much of that sort of thing - Dóra Maurer was very interested in Art As Research Process, experimenting with different techniques to see what would happen, which I always think is All Well And Good but I'd rather see the one interesting thing the artist DOES with the RESULTS of these experimentations, rather than the experimentations themselves. Rather wonderfully, however, it all got much better right at the end when we got to some Quasi images (fives canvases with geometric lines painted, as noted by the aforesaid Bristles IN My Brush, as if they were under different light conditions) and especially some sort of 3D colour images painted onto differently shaped canvases. Things like this: 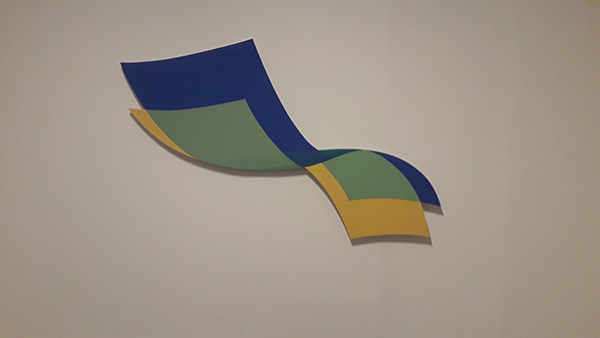 It was lovely, especially because usually it's The Earlier Stuff that is the best!

SO ended a DELIGHTFUL, if occasionally hard to discuss without saying "Which Dora is that?", day of THE ART, which had only one minor disadvantage in that, when we went on to meet The Hewitts for BEER directly afterwards I got BRANE FLAGGING from all the intellectual THORT and had to be excused! Such is the price one pays for being an ART LOVER!