MJ Hibbett & The Validators: Payday Is The Best Day/Mex 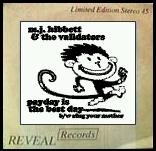 This EP is now sold out, although Ring Your Mother is now available on the Warriors Of Nanpantan compilation whilst Payday Is The Best Day is on the album Say It With Words.

Another GRATE idea which didn't turn out quite as well as I'd hoped. The Domino's album was coming out on the same day as Say It With Words, being joint-promoted throughout, so I thought it'd be clever to do a joint single beforehand to get promotion going. I went to see Tom at Reveal, and somehow persuaded him that he should put it out, which he did, and that we'd promote it for him – this turned out to be difficult, as he was rather reluctant to let us have any spare copies, and I ended up having to BUY copies from him to be able to give them to the band! Because there ended up being little or no promotion, shops were reluctant to take it, so it didn't sell many, and so apparently they were reluctant to take the albums too. Oh well. It looks nice anyway, with a Monkey Cover by Giles Domino, and I personally Quite Like Ring Your Mother, although it seems nobody else did!