MJ Hibbett & The Validators: The Lesson Of The Smiths

EP/Singles: The Lesson Of The Smiths 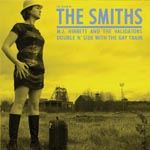 The second single from WE VALIDATE!, with two live favourites, three brand new songs, a Smiths cover and a pile of multimedia extras, including a complete Live Album!

This item is available to buy direct from us for £4.00, with postage and packing free anywhere in the world.
You can get it online here:
iTunes
Spotify


Reviews:
To Hell With:

it�s taken far too long for �lesson of the smiths� to be released as a single, and its still as brilliant as when i heard it the first time on their album �we validate!� last year. its a sharp witty indiepop song about liking music for what it is and not the image it has. �gay train� is another great song from that album, which talks about going to gay pride as a straight man. their songs are often humourous on the surface but have a point to make as well, if the artic monkey�s make songs about life for 18 year olds, then mj hibbett & the validators do the same for 28 year olds. the b-sides �never going back to aldi�s� and �other band�s setlists� show off their inventiveness and observational lyrics. track it down, they�re the best band you�ve never heard of.

L has just texted to say that she is watching a band singing a song about their boss being in an indie band. She says they are awesome and that she loves them. Well of course, why wouldn�t she? When the band in question is of course the mighty M.J. Hibbett and the Validators� As far as I�m aware that particular tune is not recorded yet, but I did read it about it on Mark�s blog recently. It also reminds me that really I ought to have told you previously about the release of the anthemic �The Lesson Of The Smiths� as a knockout single recently. I wrote about the track as part of the We Validate! set in June last year of course, and I think I have played that track at each of the EGP! nights so far. We are hoping to get to see Mark play at the LLAMA festival up at Lynton in June. My guess is it will be every bit as surreal as seeing The Clientele play there a few years back.

This arrived in the office this morning and, bugger me, I was delighted. Because I love MJ Hibbett. He's a rare breed these days, one of those endlessly funny, shouty, shambolic, off-key amateur singer-songwriters who's one part Red Wedge, two parts Smithsy English kitchen-sink pop and three parts Half Man Half Biscuit. If you've ever liked any of those things (or songs about ordinary life that are as silly and profane as they are lovely and profound) you'll like this.

I first heard The Lesson Of The Smiths when MJ played on his own at The Light Programme, a club Dan and I used to run in a pub in Stoke Newington a few years back. This version is bigger and better � notable new additions being a spot-on Johnny Marr guitar pastiche at the start and big bags of extra jangle. The lyrics cut through indie snobbery at a slice (as well as sing the praises of Take That and make a brief diversion into politics � but of course!) and the inlay card is full of Smiths album cover mock-ups like these:

The "Meat Is Murder with a colander" made me laugh coffee out of my nose.

He's Peterborough's finest, and he's on a crusade to bring back humour to indie pop, and for that, bless his heart, I salute him.

After the rather excellent album that is We Validate!, time for another nice MJ Hibbett and the Validators single. This time around, the EP is a double A-side with both tracks being on We Validate! - along with the usual value for money extras of a few bonus tracks, and as is the usual for the band, a host of extras on the multimedia section of the CD. So what's there to like?

As soon as you see the sleeve, you'll see that the cover's a nice tribute to those Smiths singles covers. The band all had a go at doing a tribute, and the one that won adorns the front cover - no less than Barbarism Begins At Home, re-done by Emma Pattison from the band - and nicely done. Open the foldout sleeve, and from top left to bottom right you get eight other efforts, and they are What Difference Does It Make?, William It Was Really Nothing, The Queen Is Dead, Meat Is Murder, Bigmouth Strikes Again, Sheila Take A Bow, The Boy With The Thorn In His Side and How Soon Is Now? (I know my Smiths covers, I do :)

As it happens, The Lesson of The Smiths is my favourite track off We Validate! The opening just reminds me of several classic Smiths songs, and the whole theme revolves around the fact that just because other people you may not like might like the music of The Smiths or Take That, it shouldn't stop you enjoying their tunes if you actually like them. The chorus is said with so much aplomb which reinforces the theme, but because of the use of words like "pillocks", "wankers" and some swear word beginning with "s", even though done tongue in cheek, it may have fallen foul of the censors. So much so, that for this EP you have the standard album version as well as a radio edit as the last track, which adds silent parts to where the offensive words would be. I guess one option would have been to use an alternative word here and there, but it may have flowed the feel of the song somewhat.

"The Gay Train" is the other A-side here, and starting off all John Cooper Clarke, it tells the story of being in London and watching a Gay Pride parade, and how the letting off of the balloons to signify those who'd died of AIDS being a poignant and touching moment. The key lyrics though were what Hibbett's mate's dad said to him once "It doesn't matter if you're straight or gay, all that matters is love" - and that is so true. It's quintessentially the same as the album version, but no bad thing as it works really well.

And the live favourite "Never Going Back To Aldi's" is next up on the EP, a jolly little tale of how when money was scarce that Hibbett would shop there but once he started earning more money, the food in his fridge was the equivalent of bling and so he never had to darken Aldi's door again. Previously only available on some Artists Against Success compilation, it's a welcome move to see it released properly. "Other Band's Setlists" says what it does on the tin. It details how bands leave setlists behind and how it paints a picture of their music to the next band that plays with what's on their lists, usually typed or laser printed on A4. Cute!

An acoustic version of "We Only Ever Meet In Church" follows, and although not as full on as the big band that appears on the album version, it's different enough to be enjoyable, sounding very raw and stripped down. In terms of production there's a bit of an echo in Hibbett's voice, but the feel comes across nonetheless. Then there's a cover version of "Vicar In A Tutu", the Smiths classic. In fact I can only recall one previous cover of this song (as done by Therapy?) so it was nice to hear it. It's not that much different from the original as such, but it has that really immediate "done in half an hour" feel that makes it work.

And there's more in the multimedia section. As well as all the lyrics and annotations to all of the songs, you also get the video for "The Gay Train" as well. Although it's been online for a considerable amount of time, the Quicktime version here is much much better quality than the online one, and very watchable. A worthwhile addition, as is the demo version of "Hey Hey 64K", a reworking of "Hey Hey 16K" with Commodore 64-related lyrics instead. It only got to demo stage, but the annotation and lyrics explain just what happened to that. Oh, and how about a full gig from Leicester in MP3 format? That's there too, although you're probably best playing them from the folder, as the HTML used requires lots of active content permissions on IE, and it doesn't play with Firefox. The gig itself sounds rough and ready, but nonetheless it's a freebie, so no complaints really - plus it gives you an idea of the live set.

What's apparent here is that as an EP it works well as a sampler for the band's work, and if you haven't heard them before, it's well worth checking out. In fact, do yourself a favour - order it now and be satisfied with the fact you've discovered the true raw spirit of indie music that's still out there. For a fiver you get quality audio tracks and a host of multimedia extras that just give you immense value for money. And that has to be a ogod thing doesn't it? I guarantee you'll be singing along the chorus to The Lesson of The Smiths.. it's just so catchy!

MJ Hibbett & The Validators return with a double A-side EP featuring two songs from their We Validate! album, a brace of new and alternate material plus as much multimedia stuff as will fit into the rest of the space on the CD.

The eponymous lesson in this EP�s title track is an important one: bands should be judged on their work, not the people who like it. Or, to put it more bluntly, �just because a bunch of wankers like it doesn�t mean that it�s shit.�

MJ Hibbett�s engaging and thoroughly entertaining style is present in force on this EP, kicking off with his most danceable tunes, The Lesson Of The Smiths and The Gay Train he also proves his lyrical salt by placing his own words next to Morrissey�s on a cover of The Smiths� Vicar In A Tutu.

Whack the disc into your PC and you�ll find the usual notes and lyrics plus a whole 12 track live album, the video for The Gay Train and the sequel to an earlier internet hit, Hey Hey 64k.