Blog: A Graduand No More

Last Friday was a momentous day, for LO! it was my graduation ceremony, the point at which my PhD was fully totally completely DONE! Or, as it turned out, NEARLY done.

It was a gorgeous sunny day, even at the ungodly hour of 6am (IN THE MORNING!) which is when I had to get up in order to get to the pre-ceremony preparations. I did NOT go to ART COLLEGE in order to get up early, but I was prepared to make an exception here at the very end.

I thus left the flat bright and early to get the high speed to St Pancras and then the Thameslink to Blackfriars, which meant I got off the train at Blackfriars Bridge with its AMAZING view of That London. This was followed by a lovely walk along the river to The Royal Festival Hall, arriving with 15 minutes to spare before the building actually opened. All the advice said "You MUST arrive super-early" and even though I knew that this was unlikely to be the case I wanted to be sure I got there in time, and by the looks of the small crowd MILLING ABOUT I was not alone.

Once they let us in it all went very smoothly - I got my ticket, proceeded to the GOWNING area, and got GOWNED UP. I knew that people being awarded a PhD get a SPECIAL HAT, but I was not quite prepared for the SPECIAL GOWNS too, nor indeed the colours i.e. BRIGHT PINK AND PURPLE. I looked around and saw that I was currently the ONLY person wearing such vivid colours, as everyone else was in BORING black gowns with PEDESTRIAN mortar boards. I don't mind telling you that I felt PRETTY FLIPPING SPECIAL at this point, and you can see why BELOW: 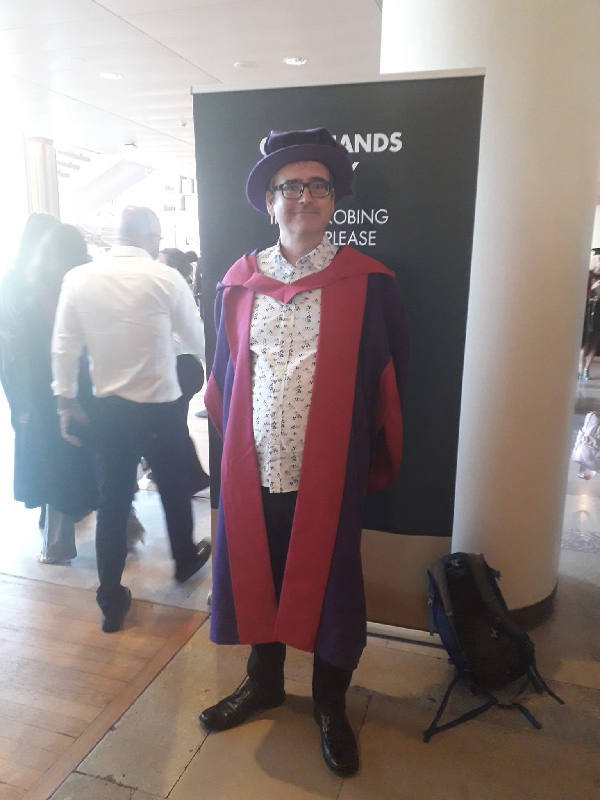 Even the HAT fitted properly, which is something that no hat in my LIFE has ever done before! I then proceeded towards the PHOTO STUDIO section to get my Official Photograph done - I know there is mixed opinion about the worth of doing these Official Photographs, but after six years of study I thought "SOD IT, I am going ALL IN" and so DID. It was all super efficient and I was all done and dusted within about ten minutes. I was Quite Impressed.

With that done I went to have a cup of coffee, and was soon joined by The Tassle On My Hat, who had not had much difficulty finding me, due to the aforesaid OUTFIT. Shortly after this we made our way to the auditorium, where I was surprised to find myself sitting right on the first row, right at the end nearest the door. "Hang on," I thought, "does this mean I'm going on first?" At this point a Nice Young Man who looked very much like TV's Gian Sammarco (i.e. who played Adrian Mole in the telly series and thus looked also very much like a young ME) came over and said "Are you ready to start the whole thing off?" It turned out that there were only TWO PhD students getting awards for this session, and as the other was my pal Dr T Yu-Kiener that meant that I was alphabetically in the lead. YIKES!

The ceremony began with everyone processioning in, including our esteemed Chancellor The Artist Grayson Perry in his ROBES (which I fear made mine look slightly LESS flashy) and various Professors, including mine and Tobias's supervisor Professor Roger Sabin, who gave us a big THUMBS UP as he went by. Next was the HONORARY FELLOWSHIP award which, to my GRATE delight, went to ACTUAL GLEN MATLOCK, who did a LOVELY speech, then we were rustled up and taken through a Secret Door to the backstage area. Something else was going on onstage while this happened (I later worked out it was conferring some Professorships) but I wasn't paying attention. I was too busy worrying about what to do as I marched across the stage - should I do something HILARIOUS? Or be very SERIOUS? In theory I was setting the tone for EVERYBODY who followed so the responsibility weighed heavy, but in the end I just stomped on and WAVED THE HECK out of the area. It seemed to go OK, but you can judge for yourself below!

After all that I skipped merrily along a corridor to collect my certificate and thus finally bring all proceedings to a halt. I was full of excitement and delight, so was just a little bit miffed to find out that they had FORGOTTEN my certificate! They'd forgotten Tobias's too - apparently PhD Certificates get printed somewhere else, and either hadn't been done or had been left behind. This was SOMEWHAT annoying, but not entirely out of the blue - in the nicest possible way, of all the many educational establishments I have worked and/or studied at, I would rank UAL at around #7 for Efficiency.

After a bit of a grumble we went back to our seats for the rest of the ceremony. The nice thing about going first was that it meant our bit was DONE, but it also meant that we had the whole rest of it to get through. We were both VETERANS of this sort of thing though, so we very much paced our Gentle Clapping and got through it without injury.

When it was all over we went to sort out the certificate issue with an EXTREMELY apologetic lady (she's going to get them posted to us) and then went in search of our other halfs. We found Mrs Tobias and then got an Instant Message from my own Steps On My Stairs saying she'd discovered FREE BUBBLY on the fifth floor, so we all made our way there where we had a LOVELY time. We grabbed Roger and there was much LARFS and FIZZ and it all felt rather wonderful. As the most colourful people there, a number of people came over and asked a) to have a photograph with us and b) what the robes were all about, and we were VERY happy to oblige!

Roger went off to have his Official Luncheon with Glen Matlock, the Yu-Kieners headed home, and we soaked in the atmosphere a bit more. The View Of My Vista had been particularly moved by it all, loving all the speeches (I must say they had been good - especially the Student Representatives) and the general feeling of everybody all being VERY proud of each other. "It's been one of the best days of my life," she said. I personally loved the fact that these were all Central St Martins students who had spent the past three years being SUPER DISRUPTORS but were now just the same as any bunch of students, hugging all the pals they'd spent the past three years with and then being taken out for a Slap Up Feed by parents.

I went to hand my gowns in and something WEIRD happened - I spotted Ian From Poly Poor. "Ian?" I said, and LO! it was him - the person who had been PRESIDENT of the Leicester Polytechnic Poor Theatre Company (aka the Drama Society) in my first year. He used to be a BBC News reporter a few years ago, and I would regularly point at him on telly and say "He was President Of Poly Poor two years before I was" and now here he was in real life. He was there for the graduation of one of his children, and though I suspect he did not have a clue who I was we shook hands and it was all very jolly, but also WEIRD. He'd been there right at the very start of my UNIVERSITY EDUCATION, and now here he was at the other end!

Gowns were handed in and then we wandered off, first in search of coffee, then LUNCH. We went to Mildred's Covent Garden, which was very nice indeed, and then I went and spent money in a) Milfoy's (WHISKY) and b) Gosh (COMICS) before we headed home, tired but very happy. It had been a lovely day!

Most colourful graduation ever - well done Mark (the certificate's in the post btw)!!!!
posted 29/7/2022 by DavidB